Life as an adventure: A Moving Background

(the short version — because you can't handle the long version! Okay, I'll admit it isn't short.)
Note: colored lettering indicates a link you can click on for more information or pictures.

I have been blessed to have have lived in many places. A person's abilities, possibilities, or worth have little or nothing to do with where they've been. However, experiences do influence who they are, and all this moving has made me a person who accepts changes perhaps more easily than many people, knows how to use maps well, and loves adventure. I love to hear other people's stories because they are vicarious mini-adventures.

Through these experiences, Pat knows that what's important in life has little to do with where you live, but a lot to do with your relationships. She's learned that although cultural differences and life experiences can cause differences between people, that what everyone has in common can bridge any gap. Because all people are important in the sight of God, she believes all people should be treated with respect. Pat has been told that she has a kind, calming influence, and is comfortable to be around.

Pat's calm comes from her faith. Her method of sharing the gospel is in attempting to live a life that shows God's kindness. Although she has not sought leadership, she has felt honored to find herself to be in several leadership roles in her local church and in the region, such as the Christian Women's Fellowship (CWF) and Disciples' Women's Ministries of Pennsylvania. She has served many years as one of the six Elders in her church, and as Recording Secretary for her church's CWF, as the web page creator and maintainer for both the CWF pages of the church's web pages, and the annual Craft Fair, and email correspondent to crafters.

Pat has been married many years to Jay C. Treat who is a scholar, teacher/professor, musician, a church leader, occasional preacher, and a computer (software) whiz. He's a creative and quiet genius who can do anything he puts his mind to (including installing replacement faucets), and knows many things including eleven languages. But you have to ask him questions to get any information out of him because he doesn't want to be a 'know-it-all'. Jay works at the University of Pennsylvania (PENN). He also works for Jefferson University teaching a night class on World Religions one semester a year. He has been working on a translation of ancient Greek for an upcoming publication. He usually teaches the adult Sunday School class for Marple Christian Church. He has served as Recording Secretary of the Church Board, and, at other times, as Chairman of the Board. As if that were not enough, Jay has also served as the Treasurer for the Regional Board of the Christian Church of Pennsylvania, which means attending many executive and board meetings in western Pennsylvania. He created and maintains the Church's web page, Jay's own webpage with PENN, and provides guidance and technical advice to Pat as she has been creating this web page, as well as the CWF pages. He also provided technical problem-solving for Pat's creation of the Craft Fair pages in the church's web page to advertise the craft show fund-raiser, which is scheduled for the third Saturday of every October, and to facilitate the registration of guest crafters. Technically, his name is The Reverend Dr. Jay C. Treat, but he's too humble to ever use his titles. 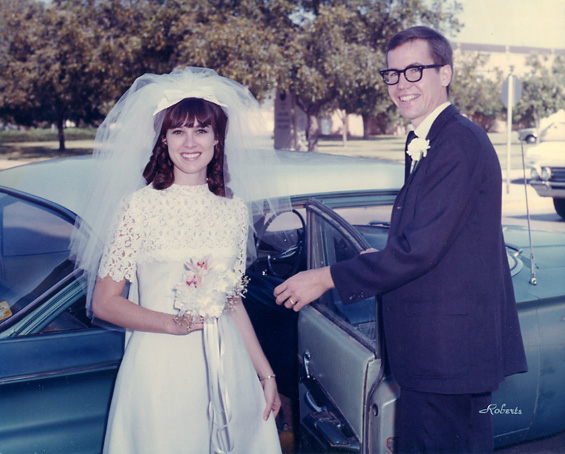 Wedding picture of Pat and Jay outside of the chapel of College Church awhile back. Jay's '59 Chevy was definitely "old" in '69 but not an "antique" at the time. Pat and Jay no longer have this car nor do they look like this anymore. 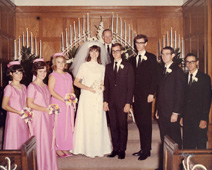 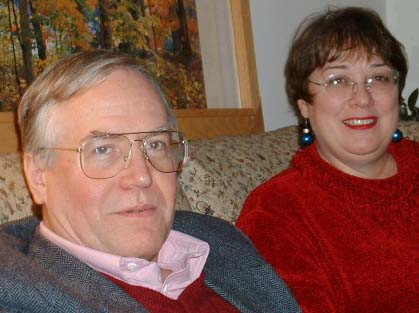 Jay and Pat look a little more like this recent Christmas picture at their daughter's home.

They have two adult descendents. The daughter, Emily, has a BS degree in Psychology from Rosemont College and a Masters from Bryn Mawr in Social Work. As a Licenced Social Worker she is the Program Manager for a local branch of Pennsylvania Mentor, providing staffing for behavioral training, mobile therapy, and therapeutic support services for children with behavioral problems associated with developmental difficulties such as autism.

She is married to Tim, also a computer whiz besides being a musician, carpenter, and dedicated softball player. Tim received his BS from West Chester University of PA in Business and also graduated from CHI. He works for Universal Atlantic Systems as 'Senior Support Tech to the IT Department'. He did the computer work for putting together our church's brochure.

Emily and Tim outside the church (by his father's antique Ford, and 4 others from his dad's antique car club, one for each bridesmaid). 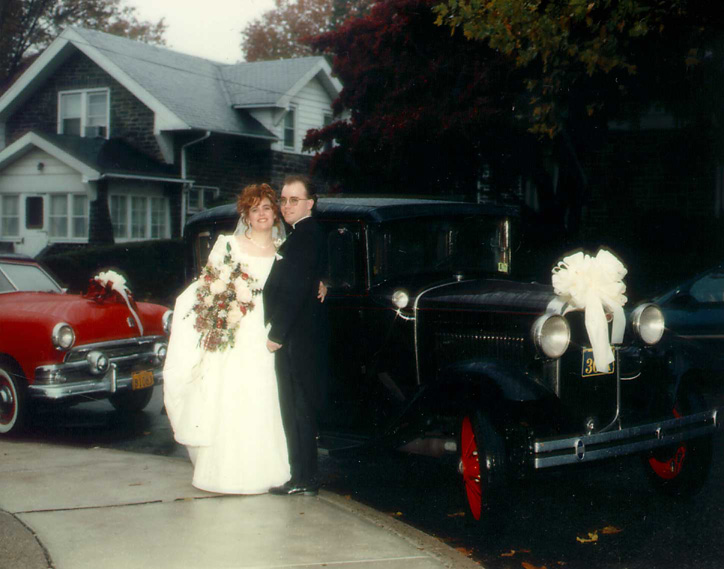 The Treats feel blessed to be able to spend time together as a family. Besides playing board games together, Tim and Jay C. play in the church's band, Chalice Sounds, together. They also sing in the church choir together, as does Pat. To learn more about their Church or Chalice Sounds, click in the blue lettering. Or go to the internet and enter www.marplechristian.org. Jay's own webpage can be accessed from the church's page on leaders.

Pat's and Jay's son, Jay E (whom we call Jayson because he's Jay's son), has a degree from Penn in Digital Media Design, and also has a computer whiz job. His position is called 'Creative Technical Architect' (a promotion from Senior Tech). He has a penchant for playing and inventing new board games, and for being entertaining. Many of his graphic designs can be seen on Jayson's web page: http://ccat.sas.upenn.edu/~treat/ He married Brenda in 2005; She works in an administrative position in Central Philly in the Wills Eye Building for a group of specialized eye doctors.

Some of the things Pat enjoys doing are making or improving floor plans for more convenient living or working, designing furniture, taking pictures (and improving them with photoshop or painting from them), camping, and problem solving/daydreaming ideas like a local rescue mission (for both homeless people and discarded items). She also enjoys her volunteer work with Meals on Wheels (as a "runner"), and at the Central Delaware County Food Cupboard. 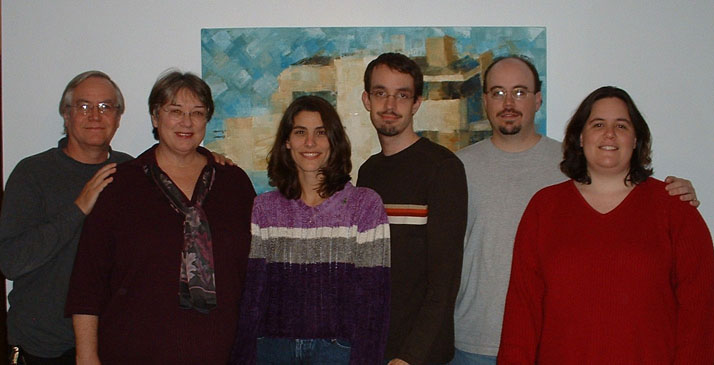