Home Page | About the Artist

Photography without and with Photoshop:

A. For an example of adding a person to a photograph, see Artist: CWF: local: goodybags

B. Pat Treat took the following pictures at a wedding and used Photoshop to improve them. [These are only four examples out of 42 improved pictures, which were presented to the couple on a CD the next week.]

1.a. A family photo, before improvements, taken in a room with low lighting with a digital camera that has automatic settings

(note the flash circle on the bride's face (center with corsage), and the other distracting reflections):

1.b. Family photo, after improvements. Picture has been cropped and the pale flash circle has been replaced with pixels from other places. Glaring reflections and distracting lights have been toned down or eliminated. And, as with all of the photographis, the lighting was brightened.

2.a. The grandparents view the wedding ring, before improvements.

2.b. The grandparents view the wedding ring, after improvements. Five people and other distractions have been removed so the attention is on the subject.

3.a. The bride and groom pose with the groom's grandparents, before improvements.

3.b. A nice portrait of the grandparents, after the bride and groom's movement blur has been removed.

4.a. Giftwrapped present photographed, before improvements.

4.b. Improvements return Pat's giftwrap job closer to how it actually looked. [A gift-wrapped wooden spatula was turned into a vase for the flowers, while the gift-wrapped cutting board becomes a frame within a frame, on top of the main package.]

C.1. This is a nice Christmas Day picture, 2004, that includes some of the terrific family of our son-in-law, Tim Haslett: 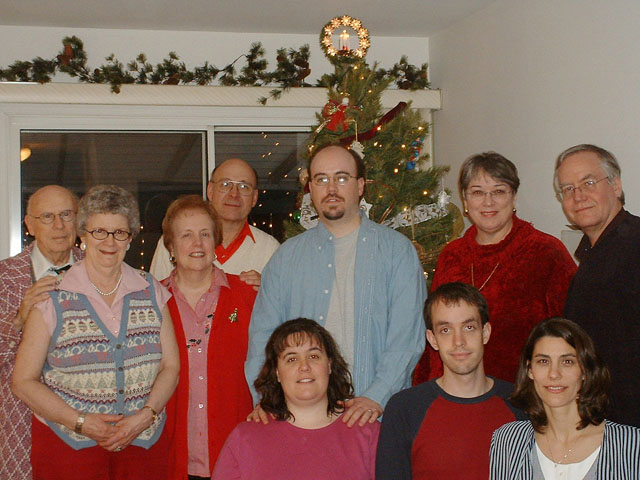 C.2. As much as we like them, it would seem odd to send a card out to our friends and family from the Hasletts as well, so a little cropping would have made a nice New Year's card to send out (following picture). Photo taken in Tim and Emily's house. 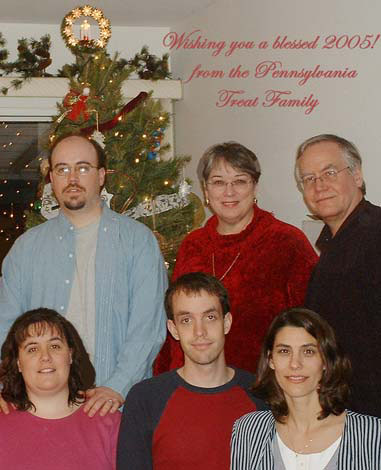 Home Page | About the Artist